I recently finished FAWM 2015. FAWM (February Album Writing Month) is an annual challenge for songwriters to write 14 songs in 28 days. This was my third year participating and succeeding!

What I’ve decided to do this year in honor of my late mother is the following; I’m spreading the joy of music by giving away this album for free with your promise to me that you’ll donate at least $14 to the American Cancer Society (one dollar for each song). You can do so by clicking here:

Once you’ve done that, you can download the album by clicking “download” in the player below or by CLICKING HERE. Just set the price as $0. If you do wish to support my music and my work as a musician, I would gratefully accept anything above $0 as a tip 🙂 This album will only be available for download this month (March)! Please see below for more details about the album.

A little more about “Still Not Too Late”:

For my FAWM efforts this year I decided to do an all-instrumental album with hopes of later producing and mastering select songs off the album to then market to television, movies, videos and anywhere else they could be useful.

Keep in mind that this album is still a little rough around the edges and captures the essence of writing and recording 14 songs in 28 days. As time permitted, some songs are more produced while others contain nuances and other quirks. Throughout this album I used %100 real instruments – no software instruments. I believe this reflects in the organic sound of the album. Also, to maintain organic integrity I haven’t done any post production further than what was done in the month of February, staying true to February Album Writing Month.

You’ll hear how my involvement with Peruvian musicians during my 3 years of living in Peru has influenced my songwriting, performance and the instruments used – especially in tracks such as the first (Inti) and last (Quilla).

Thank you for supporting the fight against cancer as well as my musical works! A $14 donation may not seem like much, but if we join together, maybe this album can raise a few hundred dollars – and I’d like to think there are thousands of others out there every day doing what they can too.

Here’s to us everyday folk working together to make a difference!

Donate to the American Cancer Society

Some freelance musicians make the majority of their money playing gigs, others giving lessons, others selling and licensing their music. Though I also work in the aforementioned areas, my main source of income is writing custom personalized songs. If you or someone you know is interested, please let me know. Whether for business or pleasure, I’ll get the job done – Satisfaction Guaranteed.

I’m working on a new page that serves as a walkthrough for ordering a custom song from me:

I’m proud to announce the official release of my latest 4-song EP titled “ReBelieve.” (Scroll down to listen) The album was recorded in my tiny apartment room while I was still serving in the Peace Corps in Peru. I’m honored to have two (actually three) amazing musicians accompanying my compositions on the album.

Ciera DeSilva accompanies with her beautiful violin sounds on all tracks. Ciera is a young lady from Canada who I met through an agency promoting gender-equality and children and women’s rights in Peru. Ciera is still in Peru working with youth and women to empower and educate them. I was lucky enough to see her (and jam too, of course) in my recent visit to Peru.

Xhio G. Tasson accompanies playing percussion on “Map to Heaven,” “You Made Me ReBelieve” and starring on the instrumental track “Festejo Peru,” which incorporates rhythms native to the AfroPeruvian culture. Her contribution includes the rock steady rhythm of cajon and the accentuation of the wood bongo. Xhio is a young lady from Chiclayo, Peru who I met through youth music programs she was leading.

I mustn’t go without mentioning the legendary Juan Carlos, who plays accordion on the hidden track (oops it’s not hidden anymore).  Ciera and I were lucky enough to make friends with Juan Carlos through passing in the city of Chiclayo. This life-long musician has played his accordion all around the world but now doesn’t stray far from the city where he plays at weddings, restaurants, retirement parties and any other occasion where his virtuoso accordion skills are requested. This gem of a hidden track was recorded one day while Ciera, Juan and I were practicing in the local musician and artists union office.

As I continue my journey as a folk singer/songwriter and freelance musician, I find myself writing on many different topics from love to friendship to faith to doubt to helplessness to joy and happiness and about anything in between. In this EP, though only a few tracks, you’ll find just about all these themes backed by the traditional-meets-contemporary neofolk musical style I’ve come to develop over the years.

Listen below and if you’d like to show support you can purchase directly from the BandCamp media player below, otherwise the links to iTunes, Amazon and Google Play can be found below the media player.

Purchase from your preferred digital distributor:

As mentioned in the previous post, I will once again be participating in FAWM: February Album Writing Month. This will be my third year and I’ll be switching gears a little and closing my mouth this time around (hmm…maybe I’ll name the album that). I’ll be doing a series of experimental instrumentals.

I’ll be selling the album for $.50 a song once I’m done with it and donating all the profits to the American Cancer Society. If I reach the goal of 14 songs within the month the album will cost $7. Maybe I’ll even reach more than 14 songs. %100 of sales will go to ACS.

Send me an email at zack@zackdavid.com to pre-order your digital copy today!

Check out my progress below and get involved while you still can!

I’m sitting in the Mexico Airport on my way back from Peru. It was a whirlwind of a wonderful trip! Between the trains, planes and automobiles, I’ve had a handful of hours to build up my to-do list for February and the coming months.

Among the pending projects is FAWM: February Album Writing Month. Songwriters and performers have 28 days to write 14 songs. During the completion of this hefty task, musicians from around the world log their progress in at FAWM.org. Singer/songwriters post their own compositions, lyricists post lyrics for performers to interpret and record, instrumentalists post music for singers to create melody and lyrics to, etc. The community provides an amazing environment of collaboration and feedback.

Many think that the idea is silly to “force” 14 songs in 28 days. The way I see it is, there’s always good stuff (whether lyrically or musically or both) floating around waiting to be harvested. You can’t wait around for “inspiration to hit.” Sure it happens like that sometimes, but I and many creative people have noticed that creativity can and should be practiced. That’s what makes FAWM such a beautiful project. I’d suggest it to any musician, lyricist, poet, etc.

This year I plan on doing something a little different. My plan is to write an album of folk and experimental folk instrumentals. It’ll be an interesting and fun experiment that will test my abilities since I’m more practiced in the composition of songs with lyrics and vocal melody.

I invite you to follow my journey of composing and recording 14 songs in 28 days. Follow along here: http://fawm.org/fawmers/zackdavid/

I also encourage you musicians and lyricists out there to sign up and join in on the fun at FAWM.org It’s free (but donations are accepted)!

Thanks for reading. Always looking forward to hearing from you! 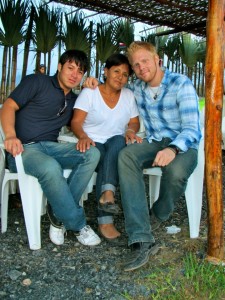 Hello friends and fans. I’m taking a little trip to my second home – Peru. I served three years in Peru with the Peace Corps working with children and adolescents and also as leader of the volunteers in my region in my third year of service. During my time in Peru I’m sure I learned more than I was even able to teach. Being a mentor to the youth inspired me to follow my dreams and become a musician as a career; something I had previously made the cheap excuses not to pursue…(the market is too saturated, I don’t want to end up making music work and not enjoyable, etc.). 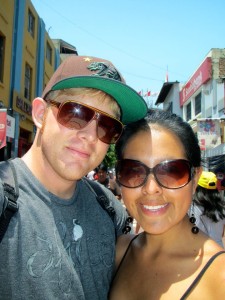 With my Fiancee Yumi!

I met so many beautiful people including my two host families that I stayed with. I met other tough-as-nails and inspiring volunteers. I met lifelong friends. I got to know myself a lot better…and I met the love of my life and fiancee Yumi.

So, no need to get mushy, but I would recommend world travel to anyone. You’ll not only learn a lot about the world and other cultures, but you’ll learn a lot more about yourself. To inspire you, here’s a track off my newest EP that will be officially released and available on all digital outlets February 3.

Here’s “Festejo Peru” (plus hidden track as you could have guessed by the waveform) for the yet-to-be released EP “ReBelieve.”

“Not Alone” was written and recorded in the latter months of 2014 as a freelance songwriting project of mine for a suicide-prevention NGO. It has since became one of my favorite projects to date. The lyrics detail the life of a young lady with depression living through an especially difficult stage in her life. The message of the song (as you could’ve guessed by the title) is that she is not alone. She is loved and will overcome.

It’s an uplifting “folk anthem” melding traditional folk styling with modern phrasing. It even features my sister’s fiancé’s son, Colin, on trumpet in the final chorus (yes, he will be collecting royalties). 🙂 I should also mention that the cover is co-designed by my sister Sara.

It’s an authentic, homegrown DIY (w/ a little help) folk project through and through!

The other day I played this song at a show and a young lady said the message spoke to her and it was what she needed to hear that day. So, for me, that’s mission accomplished.

Mr. Dave TimberWolf (friend and client of Zack David’s) made Zack a profile on his website. Check it out and peruse his website too as there are lots of good nuggets of indie music and other fun stuff to see! Click below!

Among the hundreds of projects I completed in 2014, some are more rewarding than others. This project is one of them.

I brought this client’s lyrics to life in song honoring child abuse survivors, cancer survivors and everyone who has fought and overcome life’s hardships.

“She’s a Survivor” is available at www.ivys-place.com for purchase. Proceeds go to cancer research.

I would love to elaborate your next musical project. Click here for details.

***Disclaimer: I cannot legally confirm that the proceeds or what amount of the proceeds go to cancer research. That’s dependent on www.ivys-place.com to uphold.

Welcome to the 2015 edition of zackdavid.com

2015 is the year where it all comes together.

But for now, put on your hard hat ’cause zackdavid.com is yet again…under construction.

1️⃣1️⃣ Apparently “outro” isn’t a wo

🔟You are NOT ALONE! Now maybe more than ever ma

9️⃣Fun fact: I was listening to this song in m

8️⃣ “I Hope” is one of two instrumentals o